Copaxone: My MS medicine and Cancer

I'm a huge supporter of taking medications to help slow down the progression of MS. I also follow the guideline set forth by the National MS Society which to paraphrase is, to find an MS medication that works for you and stay on it. My MS medication of choice is Copaxone. I'm not posting this to say EVERYONE GO ON COPAXONE RIGHT NOW; I just want to share what I take with everyone.

I've been taking Copaxone since my diagnosis in September of 2009 and I have never thought about switching. At the time of my diagnosis the only medications available were injectable medications, now they do have pills, but that wasn't part of my decision making process at the time.

I had to choose between five different medications:

Tysabri was nixed by my doctor from the start. The way the drug works is to lower you immune system and by default has a lot of side effects of it's one. One of the most serious is PML which is a brain infection. He said that I should try the injections first and if that they didn't work then we'd revisit Tysabri. Works for me!

Avonex, Beteseron, and Rebif are Interferon's and while the injections were less than Copaxone they all have side effects that can include flu like symptoms. As well, I would have to get my liver checked every three months. Avonex also has a REALLY BIG NEEDLE. All of the other injections are subq, which is an injection that does not have to go into the muscle. Avonex is IM which means it's into the muscle and A HUGE NEEDLE.

Did I mention HUGE?

The blood tests and the flu like symptoms were not on my list of things I wanted to do. That left Copaxone. Copaxone is an amino acid, a subq injection with no blood tests, and no flu like symptoms. Now, injecting myself every day was also something I didn't want to do, but I also felt that I had to do something for my MS.

I've had some side effects, mostly injection site stuff like itching and stinging. The stinging is like a bad bee sting and it goes away pretty fast. It is a little painful but nothing I can't deal with. Once I've had the IPIR reaction. This is where you feel like you're having a crazy panic attack for about 10 minutes (heart attack panic attack same thing - smile). I knew what it was though so I didn't get too scared.

When I was diagnosed with Cancer in June I was really worried about my taking my Copaxone shots. Call it focusing on something I had control over but I REALLY wanted my Copaxone. My oncologist's, hematologist's, and slew of other doctors had to research Copaxone and any interactions it may have with my chemo or with my immune system. However, within two days of being hospitalized I was able to begin my Copaxone again.

I was told that if I had been on any of the other injectable medications for MS they would have discontinued my MS treatment. This to me was a huge plus on the side of Copaxone. I was going to be poisoned by chemotherapy but my Copaxone was safe enough to allow me to continue to take it. I was ecstatic.

Even with all the stress of a cancer diagnosis, hospitalization, and 8 months of chemotherapy, I have not had a MS flare. Is that because of Copaxone? I can't say, but I can say that I'm sure it didn't hurt.

Just as a side note: As of January this year (2014) Copaxone is being offered as a 3x a week injection. Woo hoo less shots!

Posted by JustHer at 9:20 PM No comments: Links to this post

Bone Marrow Biopsies and You: A Practical Guide

If you have a choice of having a bone marrow biopsy WITHOUT being knocked out, or having...just about anything else actually, choose the latter EVERY SINGLE TIME. No, seriously.

So, I'm in the hospital in June before my cancer diagnosis, and they're trying to figure out what's wrong with me. They do this by doing a bone marrow biopsy. I want to get it done. I want to know what's wrong with me, and I don't want to wait. Now, I'm going to blame the fact that I at the time was very sick, sick enough to have the first few weeks in the hospital be a blur, as to why I said "Yes, I will let you stick that thing that looks like a small apple corer into my hip without being knocked out, and only with a little pain medication here on my hospital bed". Something which, no person in their right mine should or would ever say.

They give you some Vicodin and an anti-nausea medication. Do you know what this does? ABSOLUTELY NOTHING. To be fair it hurt but it wasn't excruciating, almost but not quite. Now, you would think this would be enough, oh no my friends. It seems that I have no Bone Marrow because of my leukemia. So, he hits me again with the, what I was then calling "That fucking thing". Not out loud, softly in my head. Yeah, still no bone. Do we stop? Nope.

They decide to go in a third time and at this point the nurses decide lets top her off with some morphine and something else. I didn't catch what that something else was because all I could hear were the bones cracking in my friends hand as I squeezed them. Number three happens and still no bone marrow but by divine intervention, the doctor decides to stop. As I open my eyes, I see blue flowers on my bed sheets.

This is what is known as hallucinating. They get me off of my stomach and make me lay down on my back. At which point, a marshmallow, with a face and stick arms and legs, sits on my face.

At any other time, this may have caused me distress. Luckily I realized I was hallucinating and started to laugh. Which caused some concerned faces in the room.

(Radiology knocks you out so in all honesty if you ever have to have it done do it that way. It's really a piece of cake it's no worse then having a cavity filled.)

So they roll my happy butt down to Radiology where the nice nurse gives me Versed (wide eyes). Versed is what puts you in a twilight state when you go for things like endoscopy, and it's usually pretty straight forward. However, I had two other narcotics already in me. So, what the versed did was just make me a pervert. This means that each time I woke up after the procedure (I was being monitored in the CT machine), I groggily realize that I was fondling the CT machine.

Literally fondling the CT machine like it was my long lost lover who I thought was killed in the war. Which means I was molesting a very expensive piece of medical equipment.

Things after that are a little blurry. I also made a call to a friend and I don't remember that at all. She assured me that I did so If you received a weird call from me last June you know why. Honestly, I've had two more biopsies since then and they've both went well.

What I will do now, is show you what your lower back and butt will look like if you have low platelets and multiple bone marrow biopsies at once. My mother took this picture while I was high. 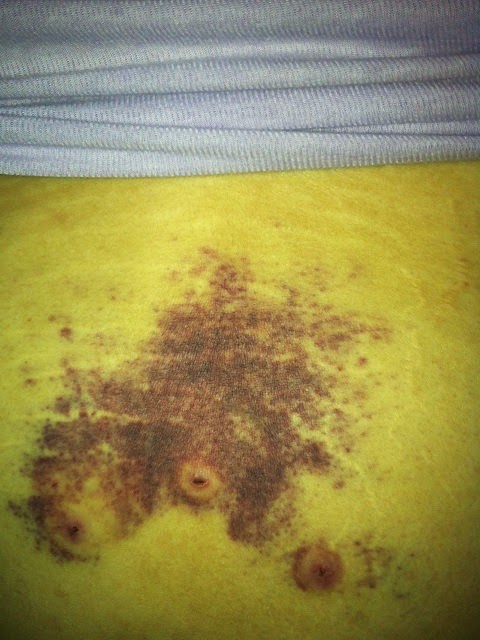 Posted by JustHer at 8:23 PM No comments: Links to this post

MS and Cancer or Why I love the Red Wedding episode Game of Thrones.

I'm back! Most don't know, some do, some don't care, but I had Cancer (record scratch)! Nope not a joke, because that shit isn't funny, and who would joke about Cancer? Well, I might joke about my experience...a little. So picture this...(magical music).

Back in January of last year I started feeling really crappy. It actually started a little bit before that but I was still doing my thing pushing through. I went out of work in January because I thought I was in the middle of a flare (little thing where the MS finally does some damage and something bad happens). I have all these tests and at the suggestion of my Neurologist I leave work. We thought this would be a temporary situation.

I keep getting worse and worse and to all my doctors it just looks like my MS is progressing. I get fatigued easily, I become dizzy quickly, and I'm just weak. We start doing functional testing to see if I can even work again. At the end of May I'm scheduled to get a Neuropsychology evaluation. A Neuropsychologist is exactly what it sounds like a psychologist that specializes in neurology, and I'm all prepared to be upset and told that my MS is progressing and that I'm doing bad health wise.

Since I'm home a lot I have started watching the Game of Thrones. I'm at home at the end of May watching the Red Wedding episode. For those of you who haven't seen it sorry but I'm going to spoil it. So, everyone is getting killed EVERYONE and I start to cough.

*cough cough* funny it feels like something is in my throat
*cough cough into napkin* Oh shit it's blood.

Now you may be asking yourselves "What the fuck is wrong with you? You had blood when you coughed and you didn't go to the ER RIGHT THEN?" Ever have a bloody nose? Well that's what I thought it was, plus it was the Red Wedding!

This happens two more times and I blow my nose after the third time to see if I do have a bloody nose. Nope. Huh, so at this point I decide that going to the ER would probably be a good idea BUT the episode still has 10 minutes. Oh yes, I stayed home and finished that episode of Game of Thrones while coughing up blood. I should probably get a walk on role or some such just for that.

Fast forward a bit to after the doctor got my blood tests back "You are very sick" Oh really (side eye)? How so? How so is that I have a platelet count of 10 (I went to look it up) and a WBC count of 1.0. Platelets do this cool thing called clotting your blood (TADA that explains the coughing up blood). Just to tell you how far gone I was normal platelets are from 150 - 400 (I was also doing things like bleeding out of my gums and bruising) and with a White Blood Cell count of 1.0 I ran the risk of catching every germ known to man oh and can't breath because my Hemoglobin is under 7.

Hospital, mask, tests, bone marrow biopsy (a whole other blog), and then a diagnosis "You have Leukemia" (blink blink).

Oh. Well, that explains a lot.

I have Acute Promylocytic Leukemia or APML or AML for sort.

I was hospitalized from June 1 until July 18th just to stabilize. February 7 2014 was my last chemo treatment and as of today, I am feeling pretty good. Cancer seems to be gone and I'm slowly recovering from 8 months of almost daily poison (another blog as well).

I must say thought my MS is doing quite well (laughing).

Posted by JustHer at 3:27 AM No comments: Links to this post